The last week of June saw shocking temperatures in Oregon, Washington state, and British Columbia. Differentiating a forecast in Canada from a forecast in Phoenix is usually a breeze, but not in June. All-time high-temperature records—not just daily records—were smashed across the region. Portland International Airport broke its all-time record of 41.7° C (107° F) by a whopping 5° C (9° F). The small town of Lytton set a new record high for the entire country of Canada at 49.6° C (121.3° F) on June 29. In the days that followed, most of the town burned in a wildfire.

Folks in this region are not accustomed to such extreme heat, with something like half of homes having air conditioners. The number of heat-related deaths is not yet fully known. 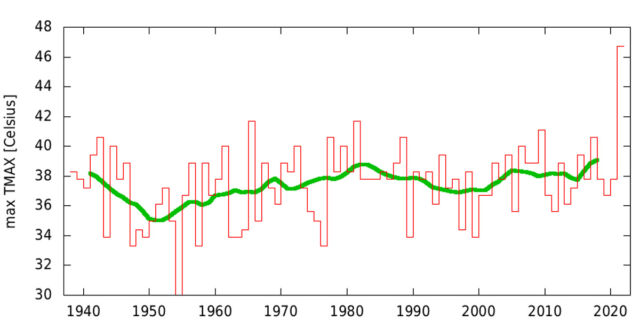 As with other extreme weather events, the World Weather Attribution team has generated a rapid analysis of this heatwave in the context of climate change. The analysis was released Wednesday. The team coordinates scientists to perform a standard set of analyses—the method has been peer-reviewed but this new paper obviously has not, yet.